Dogs grow to various sizes. The Irish wolfhound, for example, stands about 32 inches high at the withers, or top of the shoulders. The Chihuahua, however, stands about five inches.

The colour of a dog’s coat, or hair cover, also ranges widely, even within a breed. Some dogs are all black. Others are all white. Some have light markings on portions of their bodies and darker coloration elsewhere. Or, they may have a solid colour other than black. All dogs have some hair cover, even the so-called hairless ones.

The shape of a dog is determined by three major structures–the head, the body, and the legs. The size and form of these structures vary greatly as do, for example, coloration and hair characteristics. 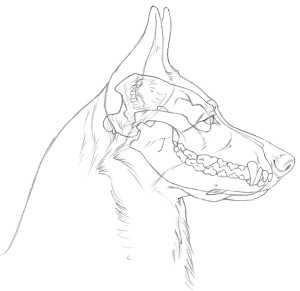 Skull-with-teeth-sideThere are two basic head shapes – a narrow skull with a long face and a wide skull with a short face – plus several intermediate head shapes. Long-faced dogs, such as the German shepherd and the cocker spaniel, may have jaws eight inches long. By contrast, the nose of small-faced dogs, such as the Pekingese and the pug, may be less than an inch from the eyes.

Dogs have 42 teeth. Six pairs of sharp incisor teeth are in front of the mouth, flanked by two pairs of large canine (“dog”) teeth. The other teeth are premolars and molars. The incisors and the canines are very important because the dog bites and tears at its food with these teeth.

Air breathed in through the dog’s nose passes on its way to the lungs through the two nasal cavities behind the nose. These cavities are lined by a mucous membrane containing many nerve endings stimulated by odors. Smell is the dog’s most acute sense. A dog continually sniffs the air, the ground, and nearby objects to learn what is happening around it. The indentation in the dog’s forehead just above eye level is called the stop. The stop in some dogs is deeper than that in others.

The fairly thin tongue of the dog is used mainly for guiding food to the throat, for licking the coat clean, and for perspiration. When a dog is overheated, it cools off by hanging its tongue out and panting. As it pants, the evaporation of perspiration from its tongue cools the animal. The dog also sweats through the pads on its paws and–slightly–through its skin.

A dog’s ears either stick up or hang down. The earliest dogs probably had erect ears, but the ears began to droop in smaller, later breeds because of excessive ear skin. Dogs have a fine sense of hearing. They can hear sounds at frequencies too high for people to hear. This is why dogs can respond to “silent” whistles.

Each eye of a dog has three eyelids, the main upper and lower lids and a third lid hidden between them in the inner corner of the eye. The third eyelid can sweep across the transparent cornea of the eye and clean it like a windshield wiper.

The head and body of a dog are connected by its neck. The neck may be long or short, depending on the size of the seven bones that support it. The length of the vocal cords in the neck is a factor influencing the pitch and loudness of a dog’s voice–its barks, grunts, and howls.

The Body
The body of a dog contains most of its vital organs. The heart, lungs, stomach, and intestines are located there. So too are its sex organs, kidneys, and bladder. The 13 ribs of the dog’s chest wrap around the heart and lungs. Since these organs influence the animal’s speed and stamina, chest size can be an indication of these traits.

All dogs have 27 bones from the skull to the point where the tail begins. The number of tailbones, however, and therefore the length of the tail, varies from breed to breed.

The body may be covered with straight or with wavy hair. Hair shafts emerge from tiny follicles in the skin. The shafts are connected to tiny muscles that cause the dog’s hair to stand up, or bristle, when they contract.

During times of stress, a dog raises its hackles–the hair along the neck and spine. Special sensory hairs called whiskers are near the nose, but their usefulness is doubtful because a dog rarely relies on the sense of touch.

The Legs
The front legs and back legs of a dog are also called the forelimbs and hind limbs. A dog uses its legs for movement, for scratching, and, in some breeds, for digging.

Each of the forelimbs is connected to the body by a long, narrow scapula, or shoulder blade. Its lower part, in turn, forms a shoulder joint with the humerus, the upper forelimb bone. The lower forelimb bones, the radius and the ulna, are fused at two points and act as a single bone.

The foot, or paw, has five toes. One of them – the dewclaw – is too high to be of any use. It is a vestigial part and is often surgically removed from puppies. The toes of the foot are composed of a number of bones. A toenail, or claw, emerges from the end of each toe. The foot also has cushiony pads for each toe and two larger pads farther up the paw. Dogs perspire through their pads.

Each of the two hind limbs is connected to the body at the pelvic bone. The upper portion of the femur, or thighbone, fits into a socket in the pelvic bone to form the hip joint. The tibia and the fibula are beneath. They make up the lower thigh. The joint where their upper portions link with the femur is called the stifle. The joint where their lower portions link with the foot bones of the hind limbs is called the hock. Like the forefeet, the hind feet have pads and four functional toes, although a dewclaw is sometimes present.

Gill White has over 30 years experience in Dog Behaviour & Training including working with Dog Trust as Training and Behaviour Advisor. She runs regular training classes for dog owners in West Sussex. The classes are part of a 6-week course that has been designed to give you expert advice, support, and guidance as you learn how to train your dog.