There are many reasons why a dog may act aggressively, but it is important that any owner with such a dog should make an appointment with their vet to have the dog’s health checked before they look for any behavioural answers. Just simple things, like toothache or an ear infection, can make us all grumpy, so rule out these possibilities quickly, as it could save you much hard work and money in the long-run. After health issues have been ruled out, your vet may recommend that your dog see a behaviourist.

Fear Aggression to people and/or other dogs. 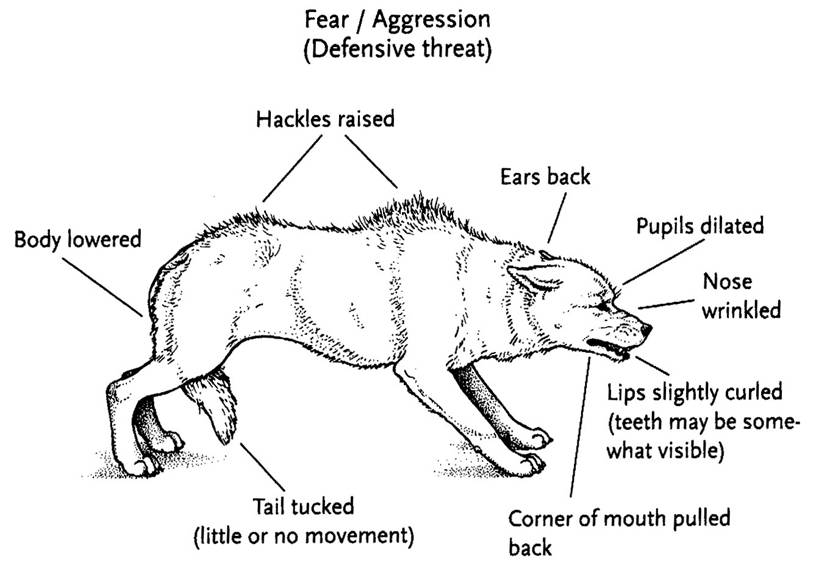 Fear aggression is one of the most common reasons people seek advice for their dogs. It is usually caused because either:

The problem is often made worse if the dog is being restrained on the lead, or cornered in a small space with no means of escape. The dog will often go through theFight, Flight, Freeze responses to the fear, but if on a leash the dog soon realises that Freeze does not work. The owner is unlikely to have recognised the Freeze and continues walking pulling the dog out of Freeze.

Flight is not an option on a leash, although in the initial stages some dogs may try to get away, or hide behind the owner’s legs. The dog is normally pulled out from behind the legs and told not to be so daft, or reassured, which further exasperates the problem.

Fight is often used when the other options have not worked. The dog may go towards the end of the lead and bark, growl, or even snap. The owner will instinctively tighten or even shorten the lead – bringing the dog AWAY from it’s fear and towards them. This action will have confirmed to the dog that aggression can work when scared as you are pulled away from the fear. The object that the dog was afraid of may now cross the road or detour round you. This moving away is another reinforcer for the scared dog to use aggression. Lastly, the owner may try to reassure the dog or even scold him for the aggression, thus giving attention to the whole scenario which will make matters even worse.

When this has happened on more than one occasion it will become Classically Conditioned, which makes it automatic and more entrenched – the dog has learnt how to avoid getting close to what it fears by using an aggressive outburst, and dealing with its fear in the only way it knows how. This does not make it a naughty dog and any form of punishment is strongly ill advised. After all, we would not punish a child for being frightened of something and expect the child to become better and overcome the fear, would we?

You need an experienced behaviourist to advise you how to teach your dog an alternative to aggression in a positive manner, without using force and, if necessary, to habituate to the dog’s fears in a relaxed, non-confrontational manner at a level it can cope with.

This form of aggression is usually worse when the dog is exercised off the lead rather than on it.

It will chase another dog that can be quite some distance away, ignoring any attempts by the owner to stop. Typically, the dog is usually quite well trained and responsive when other dogs are not around. The behaviour of the chased dog will often determine the outcome.

Often the dog will also be badly behaved in the car when travelling, particularly when it sees other dogs through the window.

This type of dog behaves exactly the same no matter who takes it out for the walk. It enjoys the chase and the owner may report it chases anything that moves, from cats to joggers. Often the owner will try to satisfy their dogs chase instinct by encouraging chase games using toys, but unfortunately due to the physiology of such problems, it can only make matters worse, especially if you could not stop your dog in the middle of it running after something. Do not switch the “on” button if you do not have an “off” button!

Please remember, if your dog is acting aggressively:

Gill White has over 30 years experience in Dog Behaviour & Training including working with Dog Trust as Training and Behaviour Advisor. She runs regular training classes for dog owners in West Sussex. The classes are part of a 6-week course that has been designed to give you expert advice, support, and guidance as you learn how to train your dog.